Skip to content
Tweet
Follow me
In this section you will find examples of my work which have not been published, usually because they are too short. It doesn’t, I hope, make them any less interesting. Quite naturally some of the leads and ideas I follow don’t really lead very far but I do not want to discard the work since it might be useful to someone else somewhere. Sometimes what I have written is incomplete and couldn’t be published because there are unanswered questions. But none of the stories I have written are ever  finished since you never know what other information might turn up unexpectedly.

The exception to this is the story of the Welsh poet, Hedd Wyn, The Black Bard, killed at Ypres in 1917. There was such an interest in him that I decided to make the whole of the story available  here for people to read. It was originally published by my friends at Welsh Country Magazine.

These pages have proved to be very popular

If you click on the link below then you will be taken to the page where you will find the research. If you know anything else about any of these stories then please contact me. I will be very pleased to hear from you.

Shot by an unknown French seaman

You will find James marking the boundary of the Pay and Display car park at the end of King Street in Aberystwyth, outside St Michael’s Church.

This is the story about the ship S.S. Polaria which called into Swansea on its voyage to New York, taking emigrants from Germany and Eastern Europe. Sadly there are no pictures but I have always found it such a fascinating story. It comes from The Cambrian newspaper from July 1882. It says so much about the bravery of the emigrants, the insularity of people at that time and the style and priorities of nineteenth century newspaper reporting. I think the original newspaper report was so interesting that it needs preserving somewhere, and this is as good a place as any.

This story comes from Holyhead and is about a number of Commonwealth War Graves that we found in the cemetery there.The Chinese graves are there because of the sinking of The Maja in 1945 by Uboat 1055 in the Irish Sea.

Click on the title above or on the photograph of The Maja to be taken to the page where you can read the story.

This is such a fascinating story. Robert Everett died when his plane crashed on Llanddona beach in Anglesey whilst on active service. Everett had an extremely eventful life. He won the Grand National at Aintree in 1929 and he was awarded the DSO for the part he played in the development of the remarkable Catapult Aircraft Merchantman, a desperate attempt to protect Allied convoys in the middle of the Atlantic. Sadly there are too many gaps in my knowledge but it is certainly a story that should be preseved – even if it is incomplete. If you do know something about Robert Everett then please let me know.

You will find the grave of E.T. Willows in the large cemetery at Cathays in Cardiff. If you follow the Heritage you will need to look for grave 20. And who was he? An early aviation pioneer who made his name in airship design. He had no formal training – indeed his initial career had been as a dentist – but he made a very significant contribution to the development of powered flight.The use of propellers driven by motorcycle engines gave him the ability to achieve more accurate steering. A forgotten Welsh hero.

This is the story of how a young Indian man from Kashmir found his resting place in a beautiful cemetery in Crickhowell.  Click on the title above to find out more about the 32nd Mule Company. 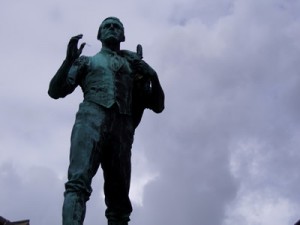 This is the complete text of an article that I wrote for Welsh Country Magazine in November 2005. Ellis Evans won the bardic chair at the National Eisteddfod but was unable to accept it because he was killed at Pilkem Ridge in the third Battle of Ypres in 1917.
This has always proved to be a very popular section of the website