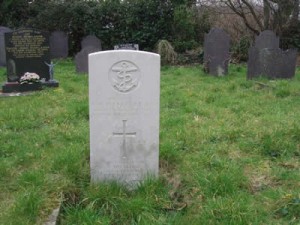 Llanddona on the north of Anglesey might be a remote place but we had no trouble finding the village. After all, it is marked on all the maps. And we didn’t have a problem finding the grave. It stands out white and proud amongst all the dark slate headstones.

It was finding the church that was hard. We drove round the village for a while, eventually stopping an old lady to ask for directions. She wasn’t comfortable in English but she managed to point us in the right direction.

Turn by the pub, the Owain Glyndwr and drop down the extremely steep slope down to the shore. It seems separated from the rest of the world. There have big cat sightings. A black puma they say. Horses have been injured. Not a surprise. Anything is possible down there.

In front of you at the bottom of the hill there is St. Dona Churchyard.

There you will find Lieutenant R. H. W. Everett, DSO.

This is the fascinating but sadly incomplete story of Robert William Hanmer Everett, Grand National winner and fighter pilot.

There are too many gaps here – and we jump from place to place without an overall sense of shape. But it remains a fantastic story, with different threads which don’t quite all fit together because what is missing is Everett himself.

In the disconnected facts I have put together, the person himself is absent. Such a full life of achievement, yet Everett himself is elusive. At the moment this story has to remain on the website. This story could not be published simply because there are too many gaps.

So what do we know?

He was the son of Lt-Colonel William Frank Everett and Charlotte Everett of Chelsea and was born in Tenterfield in New South Wales, Australia on 29 May 1901.

I do not know by what means Everett arrived at the next point in his remarkable story. In 1929 he won the Grand National at Aintree on the horse Gregalach. This horse was a chestnut gelding and was owned by W.H. Midwood and trained by T. Leader. It was quite a race apparently. It had the biggest field of riders ever, with 66 runners. It was a notable victory, worth £13,000. Contemporary reports say that the horse had leg trouble but was “cleverly piloted” by the Australian-born jockey through the heavy going. He took the lead with two fences to go, to win by six lengths at 100-1 from a famous horse, Easter Hero.

In 1934 Everett won the Irish Grand National at Fairyhouse on a horse called Poolgowran at 8-1. It would seem that for Everett speed and winning were everything.

Everett always seems to have been a keen aviator and together with his father owned a Puss Moth light aircraft at Redhill Flying Club – number 00.02.31. The de Havilland Puss Moth was a high performance private aircraft and there appear to have a few of them at Redhill, including one owned by the Prince of Wales.

But what really makes his story so fascinating is his involvement with CAM ships – Catapult Aircraft Merchantman. This is an overlooked but quite remarkable aspect of the Second World War.

Everett joined the Fleet Air Arm in October 1940 and served with 760 Squadron on HMS Heron who were involved in dockyard defence. Heron was a Royal Naval Air Station at Yeovilton airfield in Somerset. In August 1941 Robert Everett volunteered for a particularly dangerous mission with 804 squadron. He agreed to test, in open combat and in the middle of the Atlantic Ocean, an extraordinary development intended to break the dominance of the sea that the Germans maintained through their U- Boats.

Convoys bringing supplies across the Atlantic were vulnerable not only to the U-boats but also to long- distance planes that could attack shipping and act as a spotter for U-boats. It also reported shipping movements and locations to the U boats, so they could intercept in areas where it was not possible for the Allies to provide any air cover. The Focke Wolf 200 Condor was extremely effective and sank nearly one million tonnes of Allied shipping in a few months. It was the first military aircraft capable of flying within range of the East coast of the USA, with a range far in advance of any planes the Allies could use to provide protection.

In fact in 1943 a Junkers long distance patrol aircraft flew from Mont de Marsan in occupied France to a point 12 miles north of New York City and was completely undetected before it returned. It was too expensive to produce but it revealed a technological potential the Germans possessed. If they had persisted the plane would have changed the American perception of the war completely.

As far as the convoys were concerned they were effectively alone in the Atlantic without the benefit of air cover.

Their solution was the Catapult Aircraft Merchantman.

Ships were equipped with a single catapult-launched Hurricane fighter – a “Hurricat” or a “catafighter.” It was essentially the world’s first rocket-propelled fighter. Battleships already had steam powered catapults to launch spotter planes, but these catapults were not powerful enough to launch a fighter. So a rocket sled, using solid fuel rockets was developed at Farnborough

The planes though were not fitted for landings. A bit of a disadvantage you might think. But then there was actually nothing to land on. The pilot would have to ditch in the sea at the end of the flight and the plane would be lost or occasionally recovered and hoisted aboard. It seems to be a desperate rather than a practical measure, a one-way mission in the middle of the ocean with nowhere to land.

Everett was the first to test the strategy on 3 August 1941. He was launched from CAM ship Maplin which was part of convoy OG. 70

The patrolling Condor  didn’t appear to see the launch but reacted quickly to the attack, severely damaging the Hurricat. In the deadly fight, Everett fired the last of his ammunition into the cockpit and it went down in flames. He then managed to coax the Hurricat to about 2000 feet despite the damage, from where he could spot a convoy. He landed the plane safely in the water near the destroyer HMS Wanderer which was assigned to neighbouring convoy SL.81.

The Hurricat turned over and began to sink. Everett got the canopy open and struggled out to the surface (or he bailed out and was picked up by a dingy – it depends on which version you believe). For this action he was awarded the DSO by King George VI in September 1941.

He was killed on 26 January 1942 on active service following his return to HMS Heron  when his Hurricane fighter P3452 crashed on the beach at Llanddona.

And so he now lies in St Dona’s Church in Llanddona in Anglesey. 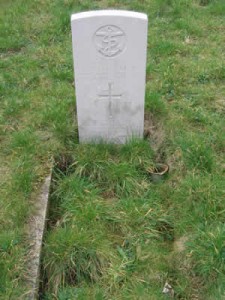 Here next to the beach where he died you will find a most interesting and sadly overlooked grave.

I do not know at the moment what happened. His death is another of the mists that seems to settle around him, obscuring a better view. A visitor to the website, Michael Marquand, very kindly contacted me to tell me what he knew. His grandmother lived in Pentrallwyn on Anglesey and she remembered seeing his plane falling from the sky. His body was recovered after a storm and taken to the stables at Pentrallwyn before his burial in St Dona’s. Local people subsequently cared for the grave of the lost airman. I have also had a message from Georgie Manners, a descendant of Robert , who keeps safely his DSO and a copy of the announcement of the award from the Daily Telegraph. The family also have an original photograph of Robert sitting astride Gregalach.

I am sure  there is more information out there, somewhere.

There are too many gaps here of course. You get a tantalising picture of Robert Everett, but it is made up of scraps and impressions. He was certainly an achiever, an adventurer, someone for who everything was possible. A confident risk taker, a lover of thrills and speed.

Perhaps those moments over the Atlantic were a deadly game to him – and that confidence that appears to have underpinned the things he did ensured his survival. But eventually his luck ran out.

Perhaps it has to.

Does anyone else know more about Robert Everett? Can you correct what is here or add to what it is that I know? I would be really interested in hearing from you if you can. His is surely a story that needs to be preserved.