I found a very interesting piece by Robert Chambers from 1869 about body snatching. When I find a grave I just try to take away the story. But in the past there was a much more sinister trade – the work of the body snatchers, or as they were sometimes known, The Resurrectionists.

And yet it was a very contradictory sort of practise, since the crime supported research and an attempt to understand the body which facilitated medical training and advancement. Everyone knew about it. It featured in literature – Jerry Cruncher in Dickens’ A Tale of Two Cities is a Resurrection Man.

The surgeons themselves accepted it as a necessary evil and would often pay the fines the body snatchers incurred or support their families whilst they were in prison. The Resurrectionists were described as being the worst characters imaginable, apart from the watchmen of the cemeteries themselves who let them in and received a percentage. They were very skilful in what they did, of necessity working very quickly. They would clear away the earth above the head of the coffin only, which they forced open “with a very strong crowbar, made of a peculiar form for the purpose.” The body was dragged out. Nothing else was taken or they might face a charge of theft for which the penalties were greater. It was a cut-throat business (sorry). Tales of turf wars (as it were) were common.

It is also clear that “the lower class of undertakers” were drawn into the supply chain. They would often supply bodies before they were buried. “Often a clergyman read the funeral service over a coffin filled with brick-bats or other substitute for the stolen body.” There was a demand and there was a profit to be made in servicing it.

The bodies that came in from the country came apparently in hat crates or casks or wrapped in “green baize cloth”. Sometimes the anatomy students would keep them in their lodgings. Now I have been to a few student houses in my time and the possibilities for hiding a dead body are many and varied. In my experience, you could hide anything in there.

However, without proper refrigeration not even a student could keep a dead body for long so sometimes they would have to take it to the dissecting rooms by hackney carriage. Chambers tells a good story about this. It doesn’t have to be true.

“Sometimes the driver was exorbitant in his demands and was sometimes ingenious in enforcing them: a pupil was conveying a body by coach to his hospital was astonished by finding himself in front of the Bow Street Police office, when the coachman, tapping at the front window, said to the affrighted youth, “Sir, my fare to so-and-so is a guinea, unless you wish to be put down here.” The reply, without any hesitation, was, “Quite right my man. Drive on.”

Before the Anatomy Act of 1832 the only legal supply of corpses for anatomical purposes were those condemned to death and dissection by the courts. But there weren’t enough bodies for the medical schools, especially since in the nineteenth century there was a significant decline in those being executed. Simple supply and demand was in operation. High demand from the expanding medical schools came up against low supplies at a time when the lack of refrigeration meant that the “Best Before Date” was always pretty close. Low supply and high demand always increases prices.

When a new university term started the Resurrectionists were out there, doing deals. The basis for negotiation appeared to £50 as a retainer to guarantee an exclusive supply, plus nine guineas a corpse. As in all markets as we are always reminded, prices can go up as well as down. Sometime they developed particular specialisms. There was for example a flourishing trade in front teeth.

It was started by a “licensed sutler” (i.e. a camp follower who sold provisions to soldiers) who had originally drawn the teeth of those who had fallen in the Peninsular War. Chambers tells us that “with the produce of these adventures, he built a large hotel at Margate.” He later died a drunk apparently, though this is not unusual in Margate.

The trade in bodies, whether intact or in portions, was so lucrative that it was not unusual for people to offer their own bodies for dissection after death. But of course the only way to guarantee really fresh corpses was to diversify from grave robbing into murder, as Burke and Hare did in Edinburgh.

Bodies could be obtained from poor houses and infirmaries by Resurrectionists  pretending a relationship with the deceased and claiming the body for burial. Chambers tells a story of the sale of a drunken man in a sack as a subject to “Mr. Brookes the anatomist”, which is clearly a vile calumny designed to besmirch a man with a fine surname.  He goes on then with a different observation. A man who was long superintendent to the dissecting room at St. Thomas’ hospital, was dismissed for receiving and paying for bodies sent to his employer and re-selling them at an advanced price, in Edinburgh; he then turned Resurrectionist, was detected and imprisoned, and died in a state of raving madness.

Therein perhaps is a lesson for us all.

Yet all of this bizarre trade existed to extend understanding and for the greater good of the people. So an unpleasant conspiratorial trade evolved. For the market to operate, it was essential that the authorities turned a blind eye as much as they could if demand was to be fulfilled. So really there was an unholy conspiracy which could only be resolved by a change in the law. It couldn’t go on as it was. All the existing law did was merely to keep the price high and extend criminality – which is interestingly similar to the argument used today about the drugs trade.

Dissection had to be legalised and a licensing system was developed in the Anatomy Act of 1832.

“This new system has much raised the characters of those who are teaching anatomy, as well as the science itself, in the estimation of the public.”

That is certainly good to know.

I have some sympathy with the grave robbers. Because by writing my stories perhaps I am in reality nothing more than a modern day Resurrection Man, recovering items ofvalue from graves and passing it on to others.

There is a very good story by one of my favourite American authors, Ambrose Bierce, which deals with grave robbing. It is very short but very good and a fine introduction to the work of this remarkable and overlooked writer.

Appropriately he defined the grave in his wonderfully twisted Devil’s Dictionary as a place in which the dead are laid to await the coming of the medical student….

The fact that Henry Armstrong was buried did not seem to him to prove that he was dead: he had always been a hard man to convince. That he really was buried, the testimony of his senses compelled him to admit. His posture — flat upon his back, with his hands crossed upon his stomach and tied with something that he easily broke without profitably altering the situation — the strict confinement of his entire person, the black darkness and profound silence, made a body of evidence impossible to controvert and he accepted it without cavil.

But dead — no; he was only very, very ill. He had, withal, the invalid’s apathy and did not greatly concern himself about the uncommon fate that had been allotted to him. No philosopher was he — just a plain, commonplace person gifted, for the time being, with a pathological indifference: the organ that he feared consequences with was torpid. So, with no particular apprehension for his immediate future, he fell asleep and all was peace with Henry Armstrong.

But something was going on overhead. It was a dark summer night, shot through with infrequent shimmers of lightning silently firing a cloud lying low in the west and portending a storm. These brief, stammering illuminations brought out with ghastly distinctness the monuments and headstones of the cemetery and seemed to set them dancing. It was not a night in which any credible witness was likely to be straying about a cemetery, so the three men who were there, digging into the grave of Henry Armstrong, felt reasonably secure.

Two of them were young students from a medical college a few miles away; the third was a gigantic negro known as Jess. For many years Jess had been employed about the cemetery as a man-of-all-work and it was his favourite pleasantry that he knew ‘every soul in the place.’ From the nature of what he was now doing it was inferable that the place was not so populous as its register may have shown it to be.

Outside the wall, at the part of the grounds farthest from the public road, were a horse and a light wagon, waiting. The work of excavation was not difficult: the earth with which the grave had been loosely filled a few hours before offered little resistance and was soon thrown out.

Removal of the casket from its box was less easy, but it was taken out, for it was a perquisite of Jess, who carefully unscrewed the cover and laid it aside, exposing the body in black trousers and white shirt. At that instant the air sprang to flame, a cracking shock of thunder shook the stunned world and Henry Armstrong tranquilly sat up. With inarticulate cries the men fled in terror, each in a different direction. For nothing on earth could two of them have been persuaded to return. But Jess was of another breed.

In the grey of the morning the two students, pallid and haggard from anxiety and with the terror of their adventure still beating tumultuously in their blood, met at the medical college.

They went around to the rear of the building, where they saw a horse, attached to a light wagon, hitched to a gatepost near the door of the dissecting-room. Mechanically they entered the room. On a bench in the obscurity sat the negro Jess. He rose, grinning, all eyes and teeth.

Stretched naked on a long table lay the body of Henry Armstrong, the head defiled with blood and clay from a blow with a spade. 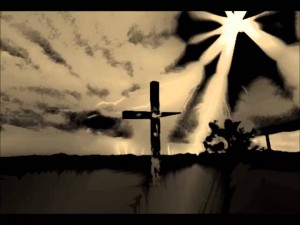