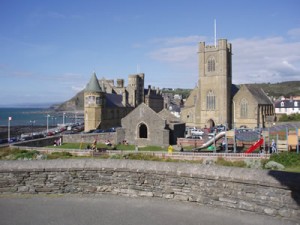 Here, just behind the bumper of the car you can find the gravestone that I went to Aberystwyth to find. The grave of John Williams. He died in 1957, aged 21. 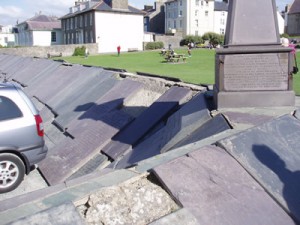 The grave seems overlooked now, an event once important enough to be mentioned in Parliament, but now long forgotten.

The stone is one of the many that line the pay and display car park at the end of King Street in Aberystwyth. It was moved and placed here some time ago. It is next to the church of St Michael which lies on the edge of the town, up against the sea.

The castle grounds, neat and picturesque protect the church from the sea, though the church was not always able to protect its congregation from its dangers. There are many graves that remember death at sea – sailors lost over board for example. You will find such graves in all of our seaports. Men who went out to sea and never returned to their families. This no longer troubles as many people as it once did.

The last time we were there, generations of families were stretched out on the grass, enjoying the sun that had unexpectedly interrupted their week of rain. We looked down on the scene from the castle. They still had to shelter from the traditional wind off the sea that always seems to throw itself at Aberystwyth. They played on the grass, surrounded by the re-sited gravestones, their histories and their stories less important now than their role as a border.

There is an arch way in the south corner where there is a lovely inscription which begins with the arresting words,

“Stop Traveller, stop and read. This stone was erected by those who fully appreciated the integrity and fidelity of David Lewis, alias The Old Commander.”

David Lewis died in 1850 at the age of 66. He had fought on the “Conqueror” under Nelson at Trafalgar and for 13 years he had been the respected Deputy Harbourmaster. He was able to build a longer life of achievement than James Williams.

Down by the arch, you will find the Williams boys. Three of them. Their father John was a mercer and he and Mary buried their three sons. James, William and John. How difficult that must have been.

Squeeze past the bumpers of the cars and you will find them. The stone has slipped down to cover those beneath it but it is thankfully undamaged.

The parental grief that it describes is hard to imagine. William who died in July 1841 and John, their second son, who died in 1825 only 7 weeks old.

But it was James, an ordinary boy from Aberystwyth who had drawn me to this car park. He was their youngest son, born in 1836. When he died at the age of 21 he was serving in the merchant navy on the schooner John and Edward.

It happened so quickly and unnecessarily. 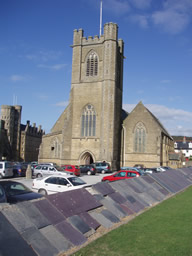 This story appears in my book Grave Tales From Wales Volume Two where you can read the rest of this sad tale..
Order a copy for £12.99 by using the button below