This unusual and moving story appeared in the Evening Post in May 1950.

It concerned William Daniels who was 19 and a builder’s labourer from Mansel Street. When he appeared in court the newspaper revealed that William kept a “little black notebook” in which he wrote down his thoughts. They presented one entry.

“I have been deaf and dumb for 10 years and do not understand life the same as hearing people. I don’t know why. I try to be the same but somehow they never talk or treat me the same as my own mates.”

On a Thursday night in early May he appeared withdrawn to his friends. They were out drinking and he tried to slip away quietly at about 8.30 pm. They were concerned and followed him to the Tawe Bridge. When he saw them he threw pound notes into the air. “Take these,” he cried and dived into the river.

Although he was a strong swimmer he lay on the surface of the water with his arms outstretched. The police were called and Constable McSparron went into the water and dragged him out.

William was taken to hospital and that was when his little black book was discovered. It was called “The Life of W. Daniels” and the details of it were revealed in court when he was charged with attempted suicide.
In it he wrote I hereby give notice that if ever I should take my own life, I leave these reasons.
He followed the entry above with this.

The next reason is I miss my brother more than anything in the world. I find it impossible to live without him. He was my twin brother and he also was deaf and dumb. He died at the age of fifteen.

William explained that he used the book to express his thoughts since he could no longer speak to his brother, in an attempt to alleviate his depression which had certainly been long-standing. In 1948 he had taken a canoe and attempted to paddle to France to escape his circumstances, but the sea had been far too rough for him.
The Superintendent of the Swansea and Central Wales Deaf and Dumb Mission said that William’s case was almost unique. He had known only other man who had regained his senses in this way. William’s life had been quite simple and suddenly he found himself dealing with what we would cause disabling sensory overload. All William wanted to do was return to  the comfort and certainties of life in the Mission. 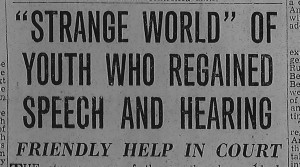 Naturally the Court was eager to help him and in the first instance the case was adjourned for three weeks “on condition that Daniels went to a hospital for a rest.”
His admittance to Cefn Coed Hospital seemed to bring him some peace and his stay there was extended. He appeared more positive and he responded to the support of the psychiatrists. When he re-appeared in court he said he had been “a coward by running away from things. I am getting a grip now and I can understand life.” He was placed on probation for three years.