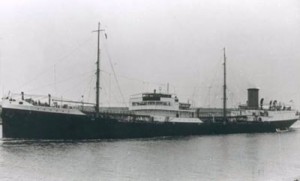 We braved the tight and labyrinthine streets of Holyhead in search of the Maeshyfryd Burial Board Cemetery and although we were betrayed by the complex one-way system, we found it eventually. We were there to take pictures of the memorial to The Thetis submarine disaster of 1939. It was not difficult to find, for it dominates the cemetery, at the end of the central aisle.

When the job was done, I turned my attention to the other graves that surrounded it. They were Commonwealth War Graves and I walked along the rows, so familiar from my visits to the vast cemeteries around Ypres in Belgium. I read them, as I always do. There was a Dutch name, there was an unknown sailor of the Merchant Navy, found washed ashore. I then found someone with my own surname, which always makes you take particular notice. It was exactly the same as all the rest, yet as they all do, it represented a unique life. A.F. Brookes, Pilot. 21 July 1941.

When I got home the excellent Commonwealth War Graves Commission website (www.cwgc.org) filled in the details for me. He was Sergeant Alan Fincher Brookes from Selly Park in Birmingham. He was a pilot in the Royal Air Force Volunteer Reserve and, more importantly, son of Alfred and Dorothy and husband of Margaret. Not a relative as far as I know but certainly a man just like me, with his own hopes and dreams ,who didn’t live long enough to make any of them happen.

But there were other graves too that drew my attention. They had Chinese names on them. It was so unexpected. They were the crew of a Merchant Navy vessel. And I had to find out what it was that had brought these men to a cold cemetery in Holyhead. I didn’t realise then that there was a Swansea connection in their story. Their story was the story of their ship, The Maja.

The MV Maja was a motor tanker. It was built in 1931 and was Dutch owned, part of the Anglo Saxon Petroleum Company fleet. It had become a workhorse, bringing fuel and crude oil to Manchester and Barry Island as part of the trans-Atlantic convoys, regularly braving danger and destruction in its vital contribution to the war effort.

Her final voyage was in January 1945 when she left Swansea for Belfast and Reykjavick with 10,680 tons of gas oil and motor spirit. Not the most pleasant of cargos but one with which the crew of The Maja would have been accustomed. On this occasion she was unescorted, although she carried gunners for protection. The gunners were part of HMS President 111. This was a shore-base in London for gunners who served aboard merchant ships to try and counter the threat of submarines. Ships like The Maja were called “Defensively Equipped Merchant Ships.” And of course you could add guns to a ship quite easily. But you couldn’t turn them from a merchant vessel into a battleship.

The Maja was essentially very easy prey. So it proved.

On Monday 15 January 1945 the ship was torpedoed and sunk by Uboat 1055, south east of Drogheda. Gunners Harris, Ibbotson, Iles, Newton, Parish and Wood, who were charged with protecting the boat, were lost along with 17 crew members.

The master, William Robinson, 37 crew members and 2 gunners were picked up by the Belgian trawler Hendrik Conscience and were landed at Holyhead.

Some bodies were recovered and taken to Douglas cemetery on the Isle of Man, whilst others were brought to Holyhead with their comrades. These were the graves I had found.

A search of the CWGC website threw up more information and with it a glimpse of the reality that lies behind the uniformity of those gravestones.

The names of their wives.

It is this detail that for me turned those exotic names into real and ordinary people. 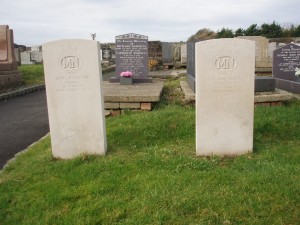 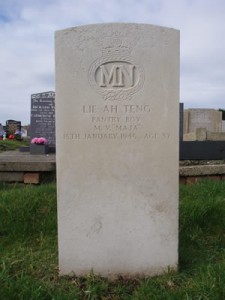 The Chief Engineer S.G.Moffit received an OBE for his actions during the attack, and Pumpman Chou was awarded the Lloyd’s War Medal for Bravery at Sea, but the ship went down and their colleagues died. It seems so tragic. An indication of the global effect of a war that could reach out as far as it did, and draw in and then destroy people from all over the world, in this case in a cold and forbidding January sea.

Ironically a previous vessel called The Maja, a two masted steel barque carrying 1960 tons of coal had been torpedoed 15 miles east of Glasgow in 1918. History can indeed repeat itself.

The story of the Uboat that sunk The Maja is no more cheerful either. It had a short destructive career under its commander, Oberleutnant zur See Rudolf Meyer. It was launched in March 1944 and only ever made two patrols.

The first began on 11 December 1944 from Marviken in Norway and lasted for 53 days. The Uboat patrolled the Irish Sea and the North Atlantic. It was a successful tour of duty.

At 6.15pm on 9 January it attacked a convoy and sank a Liberty ship, the Jonas Lie, which was heading from Swansea to America. Two vessels , the Roanoke and the Normandy Coast, were attacked and sunk on 11 January 1945. 4 days later The Maja went down. This was its last success.

On 5 April 1945 Uboat 1055 left Bergen on patrol once more. The mission did not start well. It was attacked a day a later by Norwegian motor torpedo boats but managed to escape. But 19 days later, on 23 April 1945, it went missing. It was lost in either the North Atlantic or the English Channel but no one really knows. But we do know that 49 men lie in an iron coffin on the bed of the sea.

It is just a small encounter, largely forgotten. Its Chinese victims rest above an alien sea. Their death is merely another of the many incidents that are part of the bigger picture of the war. But no matter how small a detail these two boats were, men died at sea. And they were fathers and husbands and sons whether English, German or Chinese.

There is more of this story to be told; of that I am sure. And when I find out more information I will add it here. If you know anything that I can add then please let me know.