He is remembered in the name of a street a pub and a school in Cardiff. His achievements are recorded on a clock face in Cardiff Bay but his grave lies forgotten and neglected in Cardiff’s Cathays Cemetery.

His gravestone tells us

Only beloved son of Joseph and Eva Willows

The letters on the simple stone are metal and are falling off. Without them his grave will lose its identity and become no different from the others that have faded beyond recognition. Yet it is a perfect example of a story in Welsh Stone – a fading,unremarkable gravestone, quietly shedding letters behind bushes in an overgrown part of a large cemetery, slowly slipping into the past and taking a fascinating story with it.

It is the story of Ernest Thompson Willows, aviation pioneer and celebrity, 1886 – 1926.

He was born on 11 July 1886 at Newport Road in a house which is now used by the University. His father was a wealthy dentist and Ernest always intended to follow him, beginning his training in 1901.

His great enthusiasm was flight. These early days were exciting ones, when the sky seemed to be opening up to all sorts of possibilities. It was the time of the Wright Brothers, of Bleriot, of Latham.Ernest wanted to be part of this world.

Ascents by balloon had been commonplace for over 100 years but Willows sought greater control and to free airships from the effect of the wind. What he wanted to do was construct a rigid framed balloon or dirigible and to provide it with a motor and a crew who would be able to steer it. He was convinced that the future of travel lay with the airship rather than the aeroplane. Yet he had no formal technical training, no significant financial backing, merely blind enthusiasm.

He built his first airship, Willows 1, in 1905, two years after the Wright Brothers achievement changed the world. Ernest was only 19. The airship had a silk envelope 74 feet long and 18 feet in diameter, with a gondola beneath. It was driven by a 9 h-p Peugeot motorcycle engine. It had neither rudder nor elevator, relying upon the twin propellers which provided steering capability. It was flown for the first time at East Moors Cardiff for 85 minutes on 5 August. It had six flights.

An improved version was built in 1909 which was called Willows 2. The craft was a little longer and bigger. He landed in a great publicity stunt outside Cardiff City Hall on 4 June 1910 and then flew back to his shed at East Moors. He wanted to win a £50 prize for the first such flight over Cardiff. A week later he repeated the flight to raise funds for the Infirmary. Willows was always trying to attract attention to his projects. He was a committed enthusiast but always lacked sponsorship or support. 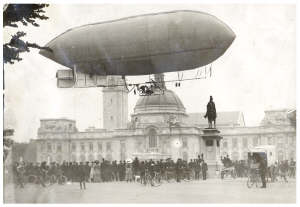 In July 1910 it flew from Cheltenham to Cardiff in four hours and then in August Willows 2 flew from Cardiff to London. This was a significant moment. The flight was a record for a cross country flight in Britain at 122 miles and he became the first aviator to fly across the Bristol Channel under power. The journey took 10 hours. He had to descend to about 12 feet off the ground and ask for dircections from stunned people via a megaphone. Sadly the world did not appear ready for this simple SatNav prototype. In the end he followed the train line.

He made sure that he flew down the Thames and over St. Paul’s cathedral, for he was always eager to place his airship in the same frame as important landmarks.

On arrival he heard of a prize of £2000 for the first man to fly from Paris to London so he decided to take the airship over the channel in order to make an attempt. Willows 2 was re-built and lengthened and called originally Willows 3. It first flew at the end of October 1910 over White City. Then it was re-named The City of Cardiff. It was now time for adventures.

On 11 November 1910 he flew the City of Cardiff across the Channel heading for Paris with his mechanic Frank Godden.

The journey was not without incident. There was thick fog over the Channel. There was a mechanical problem which required Willows to climb out on to the balloon envelope to fix it in the dark. Petrol froze in the engine. Then Godden dropped their maps over the side and into the sea. Eventually the airship came down at Corbehem, between Arras and Doua,i because of a problem with the silk envelope. On landing the French customs tried to charge him £30 import duty on his fuel.

In the end it took almost 8 weeks to reach Paris. He arrived on 28 December 1910 and on New Year’s Eve he was taking flights around the Eiffel Tower to illustrate the manoeuvrability of the design. This however illustrated his constant difficulty. His balloon fascinated as a novelty but he could not attract the investment he craved to take his concept further.

He returned to Cardiff with his balloon by road, unable to face any more continental dramas – and also apparently to escape the customs officials.

Ernest Willows moved to Birmingham and built a new airship – Willows 4 which was flown in 1912 and was sold to the Admiralty where it became His Majesty’s Naval Airship Number 2. They paid £1,050 for it. This one was more streamlined and has two four-bladed propellers and a two-seater gondola which was soon extended to accommodate a third man. It had a maximum speed of 50 mph. 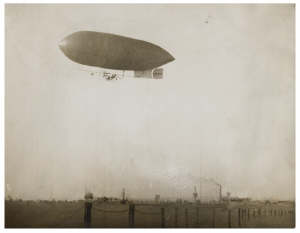 Production was moved to Welsh Harp in Hendon in 1913, where he developed Willows 5. This one had a rubberised fabric and a gondola for 4 people. He used it largely to take people on trips above London.

Of course the war intervened and he built barrage balloons in Westgate Street in Cardiff and also in Llanishen. In fact he developed a barrage balloon which flew twice as high- at 10,000 feet -as the previous limit. In 1916 he joined the Royal Flying Corps and became a captain, constantly suggesting new ideas and refinements.

His enthusiasm however made him little money. After the war he continued with ballooning though perhaps with a growing realisation that great success would always elude him.

By October 1921 he was living on a decaying river boat on the Thames watching others develop the airship. There is a great sadness that just before he died he would have known that Amundsen had flown over the North Pole in the airship Norge piloted by the Italian Umberto Nobile. It could have been him. If only….

Willows was reduced to flying tethered balloon flights at fairs. And that is how he died. He was killed on 23 August 1926 at a Flower show in Hoo Park Kempston, Bedford whilst taking people on aerial joy rides. The net covering the balloon tore away and the basket plunged to the ground killing him and his four passengers.

He had been the first person to hold a pilot’s certificate for an airship from the Royal Aero Club but he had been left behind by a lack of support and finance and his dreams and schemes fell to earth just as he did.

You will find him in Cathays, in the largest municipal cemetery in Wales. It is very hard to find your way around but the very helpful Cathays Cemetery Heritage Trail will guide you to Grave Number 20. You can download the guide by clicking here 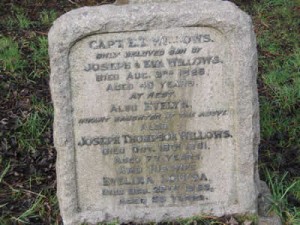