It is hard to reconcile the beautiful Welsh Hills which enclose Crickhowell in a gentle embrace, with the destructive horror of war. The Usk valley is a peaceful place and thoughts of violence and death seem so inappropriate, so intrusive. But they are there, if you look for them.

The global dimension of twentieth century conflict is well established but it is still such a surprise to see it before you, in the public cemetery next to St Edmond’s Church in Crickhowell. There are many war related graves there, local figures that fought in either world war and came home to continue with their lives. You can see their graves very easily. Large, substantial monuments to lives of reputation and achievement.

There are also 4 graves maintained by the Commonwealth War Graves Commission. They are scattered through the cemetery. They are distinctive enough to be easily identified. Look for them and you will see three soldiers from Crickhowell.

There is Charles Parsons, who was only 18 years old, a private in the Machine Gun Corps who died in May 1918. He was the son of James and Annie Parsons of Silver Street.

You can find John V. Webb, a Private in the Pioneer Corps of the Royal Engineers. The son of James and Amy, the husband of Phyllis. He died in October 1940, his age not recorded.

Major William Marshall of the Royal Army Pay Corps is there. He was the son of Benjamin and Jane and husband to Alice. He died in December 1941.

And then there is Muhammad Sakhi. He was not from Crickhowell. He came from far away, from Mang in the district of Poonch in Kashmir in Northern India. How he came to be in Crickhowell is a story in itself.

But even in death Muhammad Sakhi stands apart. Lance Naik (meaning Lance Corporal) Sakhi is beneath an apple tree, separated from the rest of the cemetery by a path. His grave does not stand in line with the others. His grave faces to the east, towards Mecca and towards his family, his father Dost Muhammad and his mother Karam Noor, far, far away. He died on 2 May 1943, aged 24, possibly of influenza, a long way from home.

His presence here in Wales reflects his service in one of the more unusual units involved in the British Expeditionary Force in France in 1940. He was part of the RoyalIndian Army Service Corps, in the 32nd Mule Company.

The Second World War was obviously a twentieth century war but the solution to some of the problems faced was a traditional one. The Mule Company was deployed to offer effective and sustainable transport solutions. Its soldiers became in fact the first Indian troops to see action.

It had been decided that each division of the Expeditionary Force should have an Animal-Transport Company, consisting of 500 mules. Four of theses companies came from the Indian Army.

Initially they were quite useful, despite the extreme cold weather. One of the major problems they had was that the mules found the icy roads difficult to deal with. It was such an alien environment – weather, landscape, culture, language. The troops were taught to say their name rank and number in English in case of capture but otherwise stayed together in their own company. The whole experience was completely alien to these young men from the hills of northern India.

The clip shows them landing in France from a troopship. They brought their own priests, doctors, vets water carriers and their own cooks. They arrived in an icy winter and are shown wearing balaclavas to keep warm.

Their duties required them to carry ammunition and supplies to forward positions, impassable to wheeled vehicles because of heavy shelling. It was also felt that the mules could do this quietly, especially since they had been “de-voiced,” though I am not quite sure what this means. This seemed to reflect experiences of the 1914–18 war and an anticipation of a static confrontation. The Germans however were too fast moving for that. The speed of their progress across northern Europe shocked everyone, including themselves. Perhaps that is why they never pushed home their advantage.

After the German attack in May 1940, the pack transport companies were ordered towards the coast and the 32nd Company became part of the Dunkerque evacuation. It was not possible to ship the mules to England, and they were left in France.

They were originally stationed in Cornwall and then in Crickhowell for a while. They were then moved by train to Porthmadog and camped at Llanfrothen and Nantmor. They practiced mountain manoeuvres in preparation for a possible landing with pack animals in Norway. Their lack of English was an irrelevance, since most of the local people spoke Welsh anyway. Wherever they went they were treated with interest and respect as a sudden and unexpected illustration of the extent of the British Empire.

Interestingly contemporary reports emphasise how the Mule Companies showed that the Indian Army Service Corps was “still an unmechanised force.” But of course this was not entirely fair. They were not primitive, just playing their part in an overall strategy.

In January 1944 they finally returned to India, arriving at 25 April 1944. They later took part in the Burma Campaign, where in fact over 30.000 mules were used. I don’t suppose the steamy jungles of Burma were any more familiar to them than the rainy hills around Penrhyndeudraeth had been. But the Indians had gone from Wales, leaving behind them a lonely grave carved in Hindi in the Usk Valley.

Sadly I can offer nothing at all that is personal to Muhammad Sakhi. I can not tell you anything about him, about what he did or what he believed or what he wished for. He is merely a representative in death of a neglected story from our own past, of how our country was supported by people from across the world, fighting for a just cause or perhaps just fighting to escape poverty at home. Who can say? But Muhammad Sakhi’s story connects with that of Lie Ah Teng, the seaman killed in the attack on MV Maja, the story of which appears elsewhere on these pages, a man dying a long way from home fighting someone else’s war.

You can find Muhammad Sakhi quite easily. Go to St Edmunds Church and turn left into the Public Cemetery. It is neat and ordered and beautiful. Then follow the path to the left and close to the boundary you will find him next to the path, under an apple tree. And always remember, the hills that look down upon him now are not the hills of Kashmir. 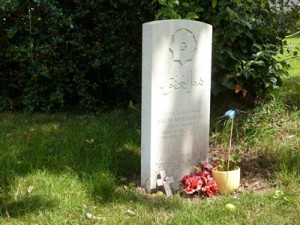