My article in this month’s edition is about the strange man Dr William Price from Llantrisant. He was wilfully unconventional and had a mania about druidism. He invented an alternative history in which Greek history was an invention of Welsh bards – in fact Homer he said was a Welshman. But it was his personal life that brought him greatest notoriety. His son born when William was 81 was given the name Iesu Grist and said he was destined to become Master of the World. Sadly he died – and the resulting scandal about his cremation on the hills above Llantrisant led to the Cremation Act of 1902 – and in this way the odd figure of William Price, who wore a fox skin on his head, has managed to influence all our lives. Read the full story in the magazine, on sale now. 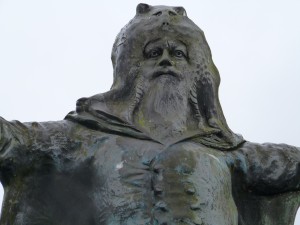