In Search of the Big  One

To be  honest if you are a grave hunter they don’t come much bigger than this. We were  in the Corbieres and we had driven beyond the spectacular hilltop castle of Salvaterre,  deep into the abandoned garrigue.
The castle lies  above the quiet and prosperous  village  of Opoul-Perillos  and beneath the  striking Opoul plateau, also known as Terresalvaesche, the Land of the Saviour,  which might give you a hint about the place to which the stories and the roads  lead.

Salveterra  is an abandoned ruin of a castle, high on a promontory above the Mediterranean.  If you look back there are expansive views.   Fifteen  miles away the beaches of the Cote Catalan might be full but up there all is  desolation. There are rocks everywhere, poking up through the scrub.
We turned  off the road beneath the castle and drove into the hills along a single track  road below the plateau of Opoul. There are no signposts. Deeper and deeper we  went, twisting and turning. This was a one way ticket. There was no turning round.  You must trust the road. We drove for about 15 minutes, slowly, always doubting  that this was really wise. There was no one in sight and the occasional  enclosures of vines were untended.

We went  past a stele to a mysterious air crash, past the church of Saint Barbara in the  middle of no- where, apparently incorrectly orientated, to the deserted village  of Perillos. The Stony Place.
There isn’t  much there. We wandered around the hot rocks. It had a strange indefinable and  unsettling atmosphere. A few piles of stone remain, old streets and the church.
The village  had been finally abandoned during the Second World War, and when you looked  around it was hard to understand why anyone would want to live here in the  first place. It is dry and barren.  A  small restoration project had begun in 2006 but that was not why we were here.
Perillos is  a place which shelters mysteries. 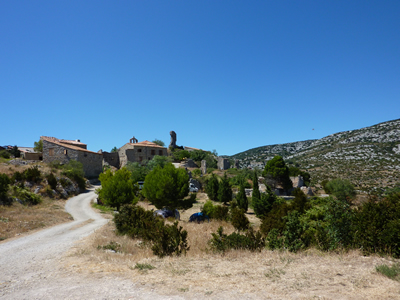 This is  where aircraft and space craft collide. UFO watchers and their friends keep  very busy here. They believe in covert government underground activity and  secret military manoeuvres. They believe in secret mines. They look at over-large  electrical substations and see a conspiracy.  They visit a ruin called “The Seat of Death.” And  how come when it is so dry and unforgiving out here was the village once known  as Perillos les Bains?  Oh yes, Perillos  is hot for mysteries.
Once again  it is the fault of the peculiar priest Sauniere from Rennes le Chateau, on whom  so much hinges. His activities across the region, frequently unexplained and  unexplainable, have spawned an industry. The world is full of people who are  desperate to find out what it was that he knew. And whatever it was, it is  believed that it relates to a treasure or, more likely, a secret which might  relate in some way to Jesus and Mary.
This website  is not the place to explore the vast array theories and the speculations which  surround Sauniere. But he is either a blank canvas upon which others project  their frustrated imaginations. Or he was infuriatingly devious, scattering  everywhere the enigmatic pieces of an elusive and incomplete jigsaw.
It is said  that he commissioned a relief map to be made of the holy sites in Jerusalem,  identifying the graves of Jesus and Joseph of Arimathea. Except it wasn’t a map of Jerusalem at all  but one of Perillos. Or rather the mould of a map of Perillos, a negative with  everything in reverse.  Appropriate I  suppose.  And so, the story goes, out  there amongst all the rocks you will find the The Big One, the grave of Jesus.  Waiting just for you.  A discovery about a death that could change a  life – and certainly a life style if it is marketed properly.
But  that is why the castle and village were here. Suddenly  it is no longer a place without a purpose, a village supporting a meagre,  subsistence lifestyle. No. The Knights of Malta were actually protecting the  site, which had upon it two places even they were not allowed to go.

Of course  there are those who want to believe such things. It adds more detail and colour  to The Holy Blood and The Holy Grail and The Da Vinci Code.  There are certainly many local legends in this  part of France suggesting that Jesus survived the crucifixion and came to  settle here in what was known then as Septimania.  And it is a secret that many have lived and  died to preserve.
Of course  we didn’t find anything, just stones glowing in the heat. A set of ruins at the  end of a road which for some others marks the beginning of a new and unexpected  journey.

There are  those who do search the hills, looking for caves and tombs.  I would say that it is impossible to find  anything out there.  Or perhaps it is  possible to find everything out there. There is just enough uncertainty to  allow the imagination to run wild.  And  the night brings a profound darkness and a big big sky full of stars. A time  for the imagination. It is no surprise to learn that Dali is involved in the  myths that surround the place. He had visions apparently. This was where he  believed the apocalypse would begin, with the “abduction of Europe.” It should  not be a surprise that the area has a suitably portentous post code – 666000.
Apparently  it is where enthusiasts come to greet time travellers from the future. Hmm. But  who is to say they would be noble scientists on a mission of research and  compassion. Knowing our luck they would be the bankers of the future (if you  see what I mean), overpaid boys with a top of the range toy coming back to see  us for a bit of havoc and confusion, stopping off at the Perillos services on  their way back from drinking themselves senseless in a Dinosaur Theme Park in  the Pleistocene Age.
This is all  part of the Chronodrome Experiment and it is all to do with messages placed  aboard an as yet unlaunched satellite called Keo that will circle the earth for  50,000 years. Once recovered on re entry, our descendants will discover an  invitation to come back in their time machines and leave us a sign in the sky.  They have, helpfully I think, been given a window of 50 years in which to make  an appearance, between 2000 and 2050. People have now started to gather every  year on the chosen date 1 May, and wait patiently for a sign.
I am not too inspired by the future  though. The couple of cars we saw in Perillos were rather unimpressive. If  these were indeed the choice of our descendants then I am afraid car transport  has an uncertain future. I better look after the Espace more carefully if I  need it to last. You never know.
Perhaps it happens all the time, this time travelling business. And perhaps our  time travelling descendents continually take the chrononaut fans away and  continually bring them back to the day before they departed. Everything is  possible.
And yet,  and yet…
The church  in the village of Perillos is St Michaels, serving a community that no longer  exists.  But misfortune is said to haunt  those who approach it and are not pure at heart, just as if you were entering  the place of the Holy Grail in Castle Perilous. There is an echo there isn’t  there? As I approached the church, suddenly, and for no possible reason, our  car alarm started to sound, an intrusive yell that cut across the cicadas and  pulled me away from the church. Why did that happen? It has never happened  before. It hasn’t happened since. There was no logical reason for it. But it  happened and we thought it best to drive away down the track. I wasn’t wanted  there.
I think I  will stick to grave hunting.
You might  feel better employed down in Tuchan or Durban, wine tasting. Just down the road  there is of course Fitou, a heady fruity glass. One of those at lunchtime will  convince you of any of the mysteries of Perillos by 3.00pm on a hot afternoon.  Two glasses and you will start thermal imaging the Corbieres.

If you want  more details then go to www.perillos.com
And if you  want to go wine tasting then I can thoroughly recommend www.chateau-wiala.com in Tuchan who produce a fantastic Fitou. Just avoid the early  afternoon. Go there after 4.00pm. Madame likes a siesta.