I have unexpectedly found a new piece of information to add to my earlier posting (10 September 2018)  about the Arandora Star,  sunk in July 194o with the loss of 800 men, a loss of life which had such a profound effect on the Italian community in South Wales.
At half term, we made a successful visit to the Science Museum in London with two of our grandchildren, Bethan and Sam. During the course of our explorations we found a fine scale model of a ship in a glass case in one of the halls on the ground floor. It is a beautiful model – and it is a model of the Arandora Star from the time when it was a luxury liner. The notes on the case indicate that it was sunk in the war but sadly no there are no details of the circumstances of the sinking.
I would have included details of the model if I had known it was there. 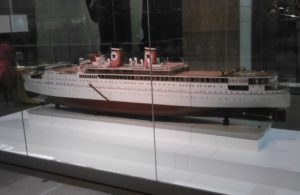