A bit delayed I know but these are busy days…

My article about Welsh gravestones in the latest edition of Welsh Country Magazine (November 2016)  is a strangely-overlooked story from  Gorseinon, Swansea. It is about Frederick Higginson a WW2 fighter pilot.. He fought in the Battle of Britain and was awarded the DFM but was then shot down in his Hurricane over France in 1941. He was captured but escaped and entered an escape route operated by the French Resistance.

He had incredible adventures as he went south to get out of France and return home. It is a story of disguise, betrayal, imprisonment and chocolate. He was eventually picked up off the beach near Perpignan and reunited with the RAF. He went on to win the DFC and was later awarded the OBE.

I first wrote about him for my book A-Z of Swansea but this version in the magazine is slightly longer. He died in 2003 aged 89 and is remembered by a plaque in Gowerton School. He is buried in the churchyard of Mary Magdalene in St Clears. 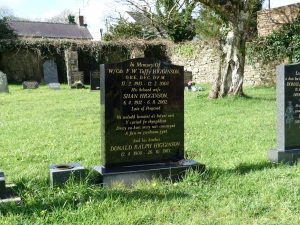 Welsh Country Magazine is available in newsagents, supermarkets and of course on line.