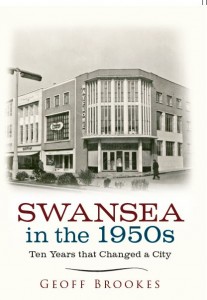 Swansea in the Fifties – was published in September 2015 by Amberley Publishing and it has been a popular title ever since.

Please note: I have no copies left of this title. However, it is still available from Amazon and from proper bookshops

The Fifties was a remarkable decade – it was the time when Swansea finally rebuilt itself after the destruction of the Blitz. In 1950 the town centre was still not much more than a collection of bomb sites. By 1959 the town centre had been re-constructed. The book charts that development.

The decade was also the time when rationing ended, the time of Teddy Boys, Bill Haley, disturbances in cinemas, zebra crossings, the Korean War, the Coronation, the H Bomb, the death of Dylan Thomas…
It was such a fascinating time and I have tried to capture some of the spirit of those times as it affected Swansea in my book. You will find out about Evan Walters who died in 1951 , pictured below with one of his excellent pieces – a portrait of a Cockle Woman, the German magician Kalanag who appeared at the Swansea Empire and was a personal favourite of Adolf Hitler, Gerald Lamarque who murdered Eric Batty in the Mackworth Hotel ….

I have included a  complete story from my researches into the events of 1950 here on the website. It is a forgotten story  about nineteen year old William Daniels who appeared in court in May 1950, accused of attempting to commit suicide. Unfortunately there was no room for it in the final version – but it is a very moving story and I didn’t want to lose it. So click on the picture below and the story will open in a new window.

Here is a link to the book on Amazon