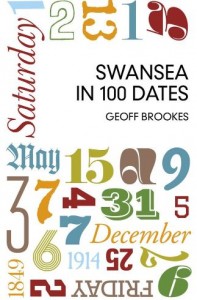 It is a simple concept, just  as the title suggests. I have selected 100 dates from the year and researched three different news events from across the centuries for each one. As a result, a wide range of material is included, ranging from the important to the downright peculiar.

You will come across murder, industrial accidents, the Blitz, the skull of the philosopher Emanuel Swedenborg, transportation – in fact all human life – and quite a bit that isn’t.
Did you know for example that the last survivor of the sinking of the Lusitania died in St Thomas in 1966?
Or that William Warman from Swansea was eaten by a crocodile in Rhodesia in 1906?
Did you know that Ellen Sweeney who died in Swansea in 1896 had appeared in court on 278 occasions?
Or that in 2005 a Swansea pet shop introduced a Rent a Hamster scheme?

Here is an example, the entry for 11 October

The burial records of St Mary’s Parish Church in Swansea show that on this day the funeral took place of Cato, described in the parish records as “a black.” There are eight occasions between 1745 and 1814 that similar language is used.

A whale was seen in Swansea Bay. It was first spotted in the late morning and fired at from Mumbles head. By late afternoon the unfortunate creature appeared at the docks where it was shot at by enthusiastic locals with guns. It was eventually brought ashore near Lambert’s Copper works and Halfway House. It was 27 feet long and was identified as a rorqual whale , its oil considered “delicate and medicinal by the Icelanders.” It was initially displayed in front of the Cambrian Hotel near the Guildhall (now the Dylan Thomas Centre) and spectators were charged 1d to see it, until the corpse was claimed by an agent of the Duke of Beaufort, to whom, once it had beached, it legally belonged. (The Cambrian)

The Rudolph Nureyev Russian State Ballet Academy appeared at Swansea Grand Theatre where they performed Tchaikovsky’s “Swan Lake” as part of the Swansea Festival of Music and the Arts.

All this – and more – is waiting just for you.

I no longer have copies of this title for sale on the website. However, it is still available on line and from bookshops
Here is a link to the book on Amazon

Click here to go to the How to Buy page