My article in the January edition of Welsh Country Magazine is about the most important tomb in Wales – that of Rhys ap Thomas in St Peter’s Church in Carmarthen. For a time he was the most powerful man in Wales, because this is the man who killed a king, the man who struck the final blow that killed Richard III at the battle of Bosworth in 1485. As the poet Guto’r Glyn wrote, he “killed the boar, shaved his head.” It marked the end of the Middle Ages and the beginning of the Tudors. The world would never be the same again. And yet the family of Rhys ap Thomas, the man who had betrayed his King, soon suffered a spectacular fall from grace.
Welsh Country Magazine is available in newsagents and supermarkets across Wales – and this edition contains, incidentally, another fantastic illustration by Jason O’Brien. You really do need to see it! 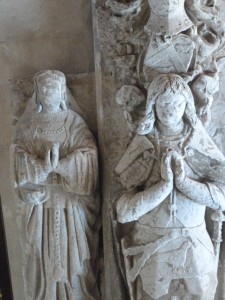