The September edition of Welsh Country Magazine is now available in newsagents and supermarkets for £2.95. My feature in it concerns one of the most influential Welshmen of all time, Robert Recorde (1510 – 1558) from Tenby. You might never have heard of him but you have certainly used his work, for he invented the ‘equals’ sign. He got fed up with writing ‘is equal to’ and so designed the new symbol because, as he said, he could think of nothing more equal than two parallel lines of the same length. As his memorial in St Mary’s Church in the middle of Tenby tells us, the sign is ‘now universally adopted by the civilised world. 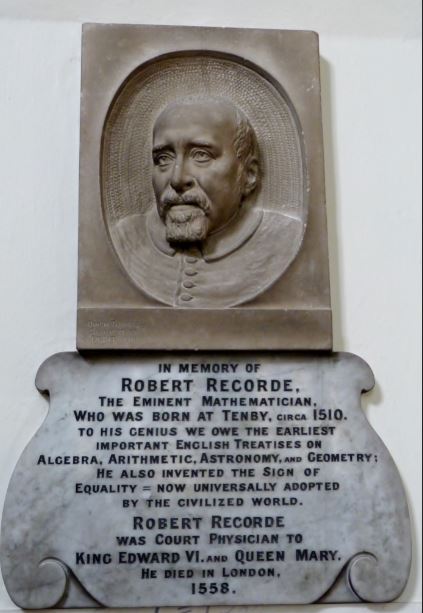 Recorde invented some other English mathematical terms which I am disappointed to say did not catch on – like ‘cinkangle’ for pentagon, and ‘siseangle’ for hexagon. But I think his triumph was the invention of a term to describe a number raised to the eighth power – zenzizenzizenic – explaining that ‘it doth represent the square of squares squaredly.’ I couldn’t put it better myself.