My piece in the latest edition of Welsh Country Magazine (September 2015) examines the life of Robert Owen, for many the greatest Welshman of them all. Socialist, philanthropist, inspiration of the Co-operative movement – he is buried in St Mary’s in the middle of Newtown. “A grave is too cold and damp for a soul so warm and true.”
He has influenced all our lives in many ways and his belief in  “Eight hours labour, eight hours recreation, eight hours sleep” -was a revolutionary idea in the nineteenth century.

Welsh Country Magazine is available in newsagents and other outlets like Marks and Spencer, Waitrose and Sainsbury’s. 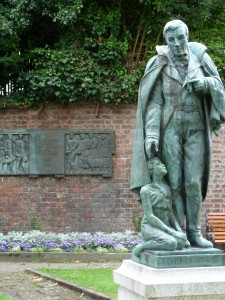