Jason is an artist and illustrator based in Swansea and I am very pleased to say that he provided three fantastic illustrations which appear in my new book Swansea in the 1950s which will be published at the end of September 2015. Jason has done portraits of three notable figures from Swansea’s artistic heritage who died during the Fifties – Dylan Thomas, Frank Brangwyn and Evan Walters. The pictures represent very classy additions to the book.

I include below an example of Jason’s work that features in the latest edition of Welsh Country Magazine. I think it is a lovely piece of work.

If you would like to contact Jason then send me an email (geoffbrookes51@gmail.com) and I will pass it on 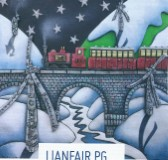