I came across an interesting piece in The Cambrian published on 17 August 1894. It is called How Others See Us and reports the impressions formed by a visitor to Swansea. Here is an extract from it.

In Swansea you are mixed up with a none-too cleanly lot. Of course now I refer to the streets. Bareheaded women with well-oiled and cosmetiqued hair, occupy the pavements, and the newspaper and match boys are generally barefooted. Swansea will rank with Liverpool in this matter, and indeed it is a curious thing that where seafaring and coal are important factors in the local trade there you will see much misery and ill-clad children. One would think that with all the poverty of London the Metropolis would be the worst place in the world; but from personal observations I think this is not the case. The smaller seaports reek with immorality, illegitimacy, and filth, and nowhere can this be seen more than in the maritime towns and cities on the south and west coasts. 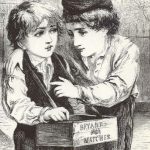 The Mumbles is the place where you are supposed to go for enjoyment, and here is the village to drive out on a Sabbath afternoon, and hoodwink the licensing laws of Sunday-Closing Wales. In Swansea you mustn’t have a smell of a potion, but at the Mumbles you can fill yourself up to the tonsils with oysters, stout, and all the good things the good fairies at the Mermaid and other hotels are pleased to provide tor you.