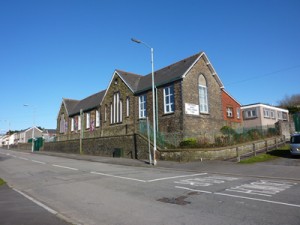 The First World War did not impact much on  Cwm School. They delayed playtime in 1914 so the children could watch soldiers  go past on the train. At Christmas 1915 they held a concert and a collection in  aid of wounded soldiers and on 17 July 1919 the school was closed for a “Peace  Celebration,” but generally the ordinary life of the school went on. However  the Second World War was different. It reached out into communities and homes,  threatening children and families.
The references in the log book begin even  before war is declared. On 4 October 1938 Miss Rees went to the Guildhall to be  shown how to work out “the size of mask (gas) suitable for each school child.”
These are chilling words, confirming the fear that everyone carried with them  into the conflict, the fear of  poison  gas.
Of course normal school life continued for the children who are usually  untroubled by world events. But then the summer holidays in 1939 were extended  to the end of September because of the “declaration of war between England,  France and Poland and Germany.” Simple words which were to have  a huge impact.
At first of course, nothing happened at  home. The school bank was paid out at Christmas as always (more than £300 in  total), attendance was disrupted by epidemics of measles and chicken pox, the  school nurse turned up to inspect the children’s heads and another one came to weigh the children who get free school milk.
But the Whitsun holidays in 1940 were cancelled owing to the “invasion of  Holland and Belgium.” And suddenly the war became horribly real.
The air raid warnings began. On 10 July 1940 there was a raid between 10.15 am  and 11.00 am which kept the children away from school in the afternoon.  It established a pattern. When the siren  sounded during school hours the children either went to the shelter across the  road or they ran home if they could. How frightening that must have been.
All raids and incidents are meticulously recorded in the Log Book.  “ARS” is noted (Air Raid Siren) and then “RP”  (Raiders Passed.)  Sometimes it might  last only 15 minutes. On other occasions the warning might last for almost 2  hours.
Attendance at school  of course was completely disrupted. If the  siren sounded during the night the school would open late. This happened  constantly through July and into early August. The school repeatedly opened at  11.00 am. Then in September the log says very blandly, “No children came to  school as there were unexploded bombs in the neighbourhood.” To us it is  impossible to believe that the words children and unexploded bombs could ever  appear in the same sentence. But in those times even a small infant school was  forced to confront life and death.  Is it  a surprise that parents refused to send their children to school? I don’t think  so.
This was the very worst time of the war for  Cwm Infants School. The planes kept coming and the weather was stormy, ripping  slates off roofs during November and December. It must have felt as if the  whole universe was hostile. In January 1941 the school was closed
“owing to damage done by the falling of a high calibre  bomb which demolished a block of houses next to the Mixed Department during  Friday night’s blitz. All rooms suffered some damage.”
These words obscure a human tragedy – of  families killed, of bodies found on roofs nearby. Such memories survive in the  community even today.
The school was closed for five weeks. But  here was no respite. Heavy raids continued until April 1941.
At this point the log book starts to talk  about “evacuation”. On 9 April 1941 the school carried out a census.
82 parents were against evacuating their child
32 were for
20 failed to reply
As a result in May 1941, 31 children were  evacuated to Llanwrda near Llandovery with a teacher, Miss Rees, who had  attended the gas mask instruction. At the back of the log book I found the  original Registration Forms for the Evacuation Scheme. Parents signed the front  to give permission for their child to be sent to a safer area…with the school party when evacuation is ordered. These scraps of paper bring the whole thing to life. Nine year olds like Iris  and Vivian Hancock, William Roberts, Graham Williams and seven year old Peter  Donald and Sydney Carter, sent into Carmarthenshire, a place so very different  from Bonymaen.
The air raids continued until 14 July 1941  and then stopped. Despite the continuing danger the evacuated children started  to drift back home.
In early March 1942 Miss Rees returned from Llanwrda. The threat seemed to have  passed and although the sirens sounded again in July, the war left Cwm School  alone. The school returned to concerns about the weather and childhood  illnesses.
Miss Rees though hadn’t finished with the  school log book. She slipped in the playground in a PT lesson and bruised her mouth and gums. Two teeth were  loosened.
The war slowly drifted away. When it came  back it was in a different form. Mrs Mason , a teacher, had leave of absence  because her husband was home on leave and then, finally,  on 8 May 1945 the school was closed for VE  celebrations.