The Maid of Cefn Ydfa 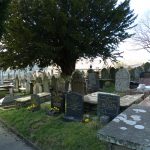 This is the story of Ann Maddocks, the Maid of Cefn Ydfa, her forlorn love for the bard Wil Hopcyn remembered forever in a folk song we all know so well.

Cefn Ydfa was an impressive residence in the Llynfi Valley about six miles north of Bridgend where in the earliest years of the eighteenth century William and Catherine Thomas had two children, a son who died in infancy and a daughter Ann. When William died unexpectedly in 1706 three year old Ann suddenly became a desirable heiress.

Wil Hopcyn – or Hopkin – was born in Llangynwyd in 1700. He was a tradesman – thatcher, tiler, plasterer – who met Ann when they were both in their twenties during some maintenance work at Cefn Ydfa. They say she would send the servants away from the kitchen at dinner time so that she could talk to him. After all, he had a reputation as a silver-tongued devil, witty, articulate and romantic. This ‘ripened into deep and passionate love.’ Inevitably such emotions could not be concealed forever and, also inevitably, they outraged Ann’s mother. A rich heiress and a plasterer? How could that make sense? You might indeed have some sympathy for her views. The relationship was forbidden. Naturally they met in the woods around the house, ‘where the young people poured out their unavailing love.’ But these meetings couldn’t remain secret and Ann was confined to her room whilst her mother promoted marriage to the favoured suitor, Anthony Maddocks, a solicitor. His ardour should perhaps be seen in another context. His father was a trustee with some responsibility over Ann and some believe that he made use of this position to engineer a marriage which would enable the Maddocks family to absorb the Cefn Ydfa estate. But then, it would be quite easy to question Wil’s motives too – marriage to a wealthy heiress would not have harmed the finances of a local labourer.

Love will find a way though and, with the help of a servant, Ann Thomas still corresponded with Wil – using the hollow of a large tree as a post box where letters could be lodged. Again their clandestine communications were uncovered. Writing materials were taken away from Ann and the story has it that she wrote to Wil on a sycamore leaf, with a pin dipped in her own blood. She then ‘trusted the precious love-token to the mercy and charge of the wind that wailed around her room in the hope that the record of her love and suffering and constancy should reach his eyes.’ They never arrived, the Welsh weather as unreliable as always. Mind you, if you prefer a more prosaic explanation try the one that says her maid didn’t take the messages but burnt them. It doesn’t matter really because the essential element in the story is that Wil, hearing nothing from her, believed he had been rejected, love sacrificed for property. Ann heard nothing from him either. Perhaps it was time to move on. Of such misunderstanding is tragedy born.

So she married Anthony Maddocks on 5 May, 1725 and two years later Ann gave birth to a daughter who died – just a few days before she did.

Wil had gone to work in the docks at Bristol after the marriage and in June 1727 he dreamt that Maddocks was dead. The dream though was a bitter deception. He returned to Cefn Ydfa to find that Maddocks was still alive and thriving, but that Ann was wrestling with fatal illness. When she cried out for her one true love Anthony abandoned her. Her mother brought Wil to her and Ann fell into his arms. She died in his embrace. Her remains were interred in the chancel of Llangynwyd church with her father and brother. Anthony married a new heiress, and now lies buried in the family tomb, outside the beautiful church of St Cynwyd.

Wil Hopcyn lived for a further fourteen years, but he never married. He died when he fell from a ladder whilst working in Llangynwyd on 19 August 1741 and was buried close to the western yew tree in the churchyard. The stone which marked his grave was later used as a foundation for a neighbouring tomb.

He had however, expressed his heartbreak in a poem, sung to a haunting Welsh folk-tune, ‘Bugeilio’r Gwenith Gwyn,’ which roughly translates as ‘Watching the White Wheat.’ In it Wil declared his undying love for someone who had abandoned him for another. Her beauty, which he had watched ripening like a field of corn, would be harvested by his rival.

I fondly watch the blooming wheat,
And others reap the treasure.

There had been a flurry of interest in the story in 1846 but it really took off in 1869 when it was published in a popular collection of poems called “The Cupid” by Thomas Morgan from Maesteg which were often performed on stage. It was followed in 1871 by a long letter to the Cambrian newspaper from Mrs. Penderel Llewellyn, ‘the worthy vicar’s wife’ in Llangynwyd, who was in the habit of putting flowers on Ann’s grave. Some have blamed her for the whole thing, claiming that she invented it all – the real Wil Hopcyn was nothing more than a drunken beggar. For others the point was that these were all real people, with gravestones. As such the story became fixed in the national consciousness, ‘the prettiest and most pathetic love-story in the whole history of Wales’ one journalist called it– and as such people wanted to believe it. And why shouldn’t they?

The story of the Maid of Ydfa came to represent the village of Llangynwyd but by the end of the nineteenth century the churchyard was described as ‘one of the worst kept in the country.’ The remnants of Wil’s headstone had been rescued by the composer Joseph Parry and placed near Ann but when the church was renovated by Olive Talbot of Margam Park, the gravestones were found in the chancel, covered by building materials.

In October 1892 a committee met at the Maesteg Post Office to raise funds to erect a monument to Ann “in keeping with the beautified interior of the church.” They invited subscriptions and hoped to receive ‘sufficient to erect a memorial over the grave of Wil Hopcyn, her humble but talented lover, who was buried under the yew tree on the western side of the old churchyard.’ They commissioned a dark marble slab, with brass plate inlaid, with Ann’s name in a ‘facsimile of the maid’s handwriting.’ On one side of the plate you can see an engraving of wheat in bloom with a sickle and on the other side some sycamore leaves. The committee were so pleased with the design that before it was installed the brass was exhibited in the shop window of Mr. Williams, ironmonger in Bridgend. These are the memorials that we can see today – Ann in the chancel, and Wil in the churchyard under the shade of a yew tree. The original gravestones are in the bell tower of the church.

It is the old village of Llangynwyd you need to visit. They call it ‘Top Llan’ and it is up the hill from the A4063 that goes through the new village and into Maesteg. St Cynwyd has a tightly packed and surprisingly extensive cemetery, regarded as possibly the largest private graveyard in Europe. Wil though is easy to find. He is still under that lovely old yew just outside the church door.

Wil and Ann are also remembered on the Hopcyn Cross, erected in 1927 to mark the bicentenary of Ann’s death. It is outside the Corner House Inn, allegedly the site of Wil’s home. Naturally he is now said to haunt the premises. Together they have inspired novels, an opera by Joseph Parry, an early silent film made in Wales in 1904 and rediscovered in a stairwell of a house near Swansea in 1984 and of course, ‘Bugeilio’r Gwenith Gwyn.” I could hum it for you but it might not go terribly well. Find Mary Hopkin singing it on YouTube. That would be best.