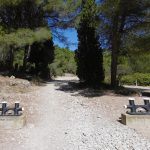 The Massif de la Clape rises above the Mediterranean outside Narbonne in the south of France. It is a beautiful wilderness, 17 km long and 8 km wide, perfect for rugged walking and cycling. The name comes from the local Occitan word Clapas – meaning a pile of stone. Rather unkind if you ask me – it is much more than that. It has fine vineyards for a start, for it is of the oldest wine growing regions in France and the wines are rich and deep, amongst Languedoc’s finest. At the top, looking down on the sea is La Chapelle Notre Dame des Auzils. It was a hot July morning as we made the long and dusty walk up the steep stones to the Chapelle, in order to enjoy the exceptional views from the top across the village of Gruissan and down towards the Pyrenees. The rocky path was lined with memorials to Gruissan’s sailors lost at sea. They died across the world – Syria, Dakar, Morocco, the Dardanelles, Colombo, Hong Kong, a father and son lost off Sicily. These are Les Marins de Gruissan and this is The Allée des Naufragés – the Path of the Shipwrecked. It is a beautiful peaceful and touching place and I stopped to look at one memorial, set back in an imposing niche in the rocks, to pay my respects. And as I read the inscription I was surprised by the unexpected reference to ‘La Cote D’Angleterre.’ 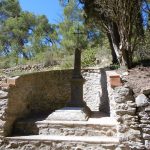 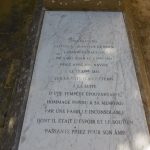 Francois Iché, the captain and owner of Brig La Supreme Sagesse was lost with his ship during a terrible storm off the English coast on 17 December 1852. He was the hope and support of his inconsolable family who pray for his soul.

I needed to find out what had happened. That idea of a life lost so far from home, of a family bereaved, spoke to me. I wanted to find out what happened. When I returned home to Wales I was able to trace the story in the contemporary English newspapers without too much difficulty. Poor Francois, born in 1804 in Gruissan on the shores of the Mediterranean, died such a long way from home in the cold winter waters of the Bristol Channel.

The Supreme Sagesse, (The Supreme Wisdom) was registered in Marseilles and was a busy ship taking goods wherever they were needed. Previously it is recorded as sailing between Nantes and Liverpool, Newcastle and Malta and In December 1852 it had been chartered to take coal from Cardiff to Sierra Leone. The captain was a twenty-four year old man from Dunkerque called Aubril and he had a crew of six men and a boy. The owner of the vessel, Francois Iché from Gruissan, had previously acted as captain but on this occasion he was serving as mate.   They left Cardiff on the 11 December 1852 but very quickly things started to go badly wrong. Before they had reached Land’s End they ran into heavy gales, which forced them to turn back to seek safety. Within three days the heavily-laden vessel was in serious difficulty. It was leaking badly in the rough seas and whilst the crew began pumping out the ship they couldn’t keep up with the volume of water collecting in the hold. Then the pumps failed. They threw part of their cargo overboard in a desperate attempt to stay afloat but it made little difference. By 16 December they were looking desperately for Lundy Island, with the intention of sheltering there until the storm passed. However they had little control over the ship and they were driven inexorably in the dark towards the Barnstaple Bar, a notorious sand bank on the Devon coast, with ‘its two formidable and perilous sand-banks.’ These created ‘local circumstances on which a stranger can be at best but partially informed.’ Notwithstanding the name of their ship, Aubril and the crew of La Supreme Sagesse knew nothing of the Barnstaple Bar. They vainly tried to drop anchor but the storm intensified. The North Devon Journal described an apocalyptic scene, with the ship ‘enveloped in the densest darkness, only penetrated by the vivid lightning.’ The deck was repeatedly swamped. Everything was washed away and their long boat, their only – and unlikely- means of escape, was broken in two. The crew took temporary shelter in the rigging but very soon the ship capsized and they were washed into the sea. Captain Aubril and seaman Paul Meriel managed to grab hold of a spar but the others disappeared into the boiling surf. After two hours in the cold sea Aubril and Meriel were washed on to Braunton Sands, exhausted, near death. Drawn by the beacon, the captain staggered to the lighthouse half a mile away to seek help. The keepers of the light, Spicer and Lamping, together with Mrs Lamping, gave ‘all the assistance and the kind attention that humanity could dictate.’ Meriel was in a particularly bad way, with ‘limbs rigid and his teeth fixed,’ but in the lighthouse keeper’s home he was eventually revived.

It is impossible to speak too highly of the kindness shewn to the unfortunate men by Mr and Mrs Lamping. This the objects of their solicitude appeared duly to appreciate and, as the captain expressed himself to us, ‘he should preserve it in eternal and grateful remembrance. The local community came to their assistance. They were given clothes by the Shipwrecked Mariner’s Society in Barnstaple and The North Devon Journal was proud to report such ‘Brotherhood among strangers.’ Other local people however had a different agenda. The ship had been completely destroyed and the debris was scattered over several miles of beach. ‘Two casks of claret and a small tub of butter was washed ashore’ and the spars and timber were given to the collector of Customs, Richard White. These were sold by auction. But the shore was also lined with wreckers who, ‘like vultures greedy of their prey seized on everything that came to hand.’ The captain’s chest containing all his possessions, like his watch sextant and compass, was found broken open and emptied of its contents. The reporter was shocked when he saw fifty women walking away from the beach carrying wreckage, ‘evidence of their depravity and tangible proof of their guilt.’ We are assured that ‘strenuous exertions to discover the perpetrators of such base and unfeeling crimes, and bring them to justice’ were being made. But for them this was their right, their harvest from the sea. The sea returned others from the crew. On 22 December 1852 the body of a crew member called Salengro was found on the sand and another, unrecognisable, was recovered the day after. The body of Francois Iché was found on Christmas Day. He was a married man who ‘left a family to mourn their bereavement.’ He was buried the next day in St Margaret’s Churchyard in Northam when a large crowd of local people gathered to support Captain Aubril in his grief. The body was carried to St Margaret’s on the shoulders of fourteen masters of vessels of Appledore, led by the Reverend Gossett.

The service was read in French and from the solemn and impressive manner in which it was performed there was scarcely an individual who did not drop the tribute of a tear to the memory of the unfortunate stranger.

Refreshments were provided afterwards in the Vicarage. The community continued to support Captain Aubril, to help him beguile the tedious hours that duty required him to remain here. The Mayor of Bideford even took him to see Wigelsworth’s Pictorial Panorama and Exhibition of Arts which had arrived in town, though the captain left in some distress when there was an unfortunate performance of a piece called “Storm at Sea.” Eventually he left, his return home arranged by Mr Chanter, the Lloyd’s Agent in Bideford. He carried with him ‘the best wishes of all who have known him during his brief sojourn.’ He was only 24 but in his short career he had already been shipwrecked twice. In August 1853 he wrote to the people of Bideford of his intention to return to the town. He would consider it ‘the most beautiful day in his life when he shall have the happiness of personally returning thanks to those who were all to him when everything in the world was lost.’

Francois was 48 when he died, lost on the cruel sea like so many others. For me he became a representative for all those other sailors lost and for whom there is no one perhaps to tell their story.

Like the others recovered from the beach, Francois Iché was buried, sadly for the historian, in an unmarked grave. His only memorial is the one amongst the hot rocks on La Clape, in the Allée des Naufragés, a long way away from where his body lies, somewhere in the soft green grass of Devon.